Still over a month left in the regular season, but following the fantastic game between the Rockets and Cavaliers and duel between the Rockets James Harden and the Cavaliers LeBron James, the discussion rages on. (Not to mention Steph Curry helped lead the Warriors to a win after trailing by 26 points on Sunday.)

On SportsCenter Monday morning on ESPN, the MVP question was posed to former NBA coach P.J. Carlesimo and NBA writer J.A. Adande, along with a twitter vote.

Carlesimo: “I’m not a big fan of ‘as it stands today’, but I think it’s got to go to the best player on the best team, unless they don’t have a great player. Golden State is the best team. Steph Curry is the best player. To me it’s clear-cut, there’s no debate, he is the MVP today. There’s still 20-some games left, see what happens the next 20, see how the team finishes then I think you have your MVP.”

Adande: “I was with P.J. Carlesimo until recently, now I have to go with James Harden. Steph Curry has benefited from having all his guys around him. The Warriors have played 40 games with their projected starting lineup, meanwhile James Harden getting it done, even though Dwight Howard has missed 27 games for the Rockets, Harden still has the Rockets among the elite teams in the western conference. He’s not just scoring and taking it all upon himself, he’s getting his teammates involved. Of course, he’s get to the lane, gets to the free throw line at among the highest rates in the NBA. To me, it’s about what a guy does to make his team elite. James Harden is doing the most to make his team elite this season.” 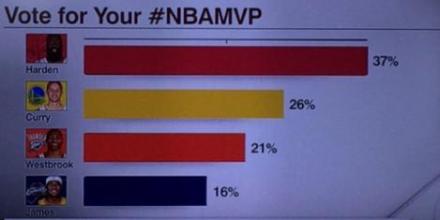 Sean Deveney of the Sporting News had this to say when he wrote, ‘James Harden for MVP? It’s getting easier to say’,  his MVP article from Monday:

“…by now Harden has defeated the preconceptions that would have kept many of my media brethren and sistren from giving him serious consideration. It is easy to vote for a stalwart like Durant or James, the guys you instinctively think of when the vision of an NBA MVP is mentioned. A guy with baggage like Harden is a bit more difficult to see as an MVP. But no less deserving.”

At USA Today, Adi Joseph explains how Harden has clawed his way to the top of the MVP heap.

“The 6-5, 225-pound shooting guard flings himself into the lane, daring opponents to block his flailing shots without fouling him in the process. When he gets a clean look, he seems surprised. Flopping and offensive fouls are against the rules, but Harden knows their penalties and has accepted the risk of punishment.

His game is a shortcut, then, in the best of ways. Harden represents a culmination of trends in basketball analytics. Nearly 70% of his shots are either at the basket or behind the three-point arc, the kinds of high-yield shots advocated by Rockets general manager Daryl Morey. The result: An All-Star caliber talent has grown into an MVP front-runner.”

This MVP race and vote will likely be unlike anything we’ve seen recently. Here’s what the last few MVP first-place vote totals look like:

The winner received at least 90 percent of the first-place votes in five of the last six seasons. It seems unimaginable, that the pool of media voters will see things that similarly this season.

How to Kill Time